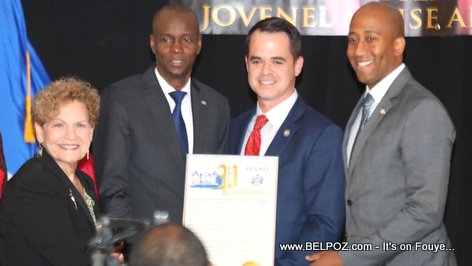 During his visit to Rockland County New York, Haitian president Jovenel Moise was honored by New York State Senator David Carlucci, a Democrat of the 38th Senate, which includes all of Rockland County and parts of Westchester County.

We're so blessed and fortunate to have President [Jovenel] Moise here in our presence. We are so fortunate that in Rockland County we have one of the largest Haitian populations not only in the state of New York but in the entire United States.

That is something that we are extremely proud of and it's one of the things that makes our community such a great place to live, to work and to raise a family...

We have a proclamation for the president that we'd be be honored to present to you to take back to Haiti to show the Pride that we have that in Albany we keep building our Haitian Unity day. We make it bigger and bigger and we talked about the Haitian experience and how its added to New York State's economy to our culture and the culture of the United States.

Haitian president Jovenel Moise was in Rockland County New York to meet with the Haitian community in Spring Valley eslecially during his trip to the 73rd session of the UN General Assembly (UNGA 73).